In LITTLE DOG LAUGHED with Nathan Gregorski.
[for THE MIRROR SHOW, role of The Lost Girl]
Kim Krane plays a gorgeous dumb blonde, but doesn’t play dumb. She is strong and funny, poignant and sweet. Her self awareness is revealed little by little, in layers peeled off like sunburned skin. She is adorable, and worth building a show around. [...] the actors are funny and have great depth, and we become invested in the fate of The Lost Girl. She is that secret part of all of us, hidden even from ourselves. Frozen, waiting to thaw.
-- Heather McAllister, nytheatre.com

[for MUCH ADO ABOUT NOTHING, role of Hero/Verges]
Cory O’Brien-Pniewski and Kim Krane cover the rough terrain of Claudio and Hero’s romance with incredible self-possession; [...] Ms. Krane deserves high marks for her turn-on-a-dime doubling as the inept and vaguely Appalachian officer Verges.
-- B. Mitchell, surrealtimepress.com

[for KEEP, role of Naomi]
Keep also offers a high-quality performance by all four of the actors in the cast. Kim Krane’s performance as Naomi, whose pureness and sincerity in her acting drags the audience into her world from her first moments on stage…
-- Anel Carmona, #quicktheatre

Krane brought an essence of delicate sincerity that allowed emotion to finally burst out of her soul.
-- Michael J. Block, Theatre in the Now

Kim Krane shines as Anna, a wayward waif whose lack of worldliness is hidden in escapes from reality through reading and fantasizing.
-- Roy Berko, broadwayworld.com

A ditzy Krane is perfect as the introverted, lonely Anna, who keeps getting fired from jobs, thinks she's no good with people and tries to connect with Will.  The scene in which she cradles a crying, remorseful Will resembles a modern Pieta and is particularly moving.
-- Fran Heller, Cleveland Jewish News


[for CLOSER, role of Alice]
Kim Krane's tremendous turn as the needy nymph, Alice Ayers, is worth the price of admission alone.  Krane made the move to the head of the class and the cast list with elan and proved she's one to watch.  Krane's performance was so mind-boggingly good...
--Elizabeth Clark, Kalamazoo Gazette


[for MOTHER COURAGE, role of Kattrin]
The bright exception was the role of Kattrin, played by Kim Krane, who established a fine balance between the passive mute who, for the first ten scenes was prisoner of her own inabilities and for the last, the defiant heroine drumming on the rooftop. Krane created a Kattrin who was both the marginalized and the empowered.
--Anthony Squiers, Communications from the International Brecht Society 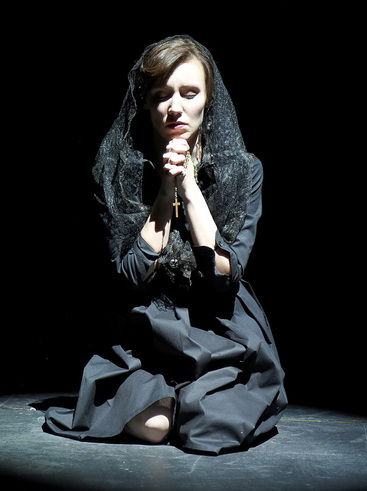 [for PRESENT LAUGHTER, role of Monica]
Among Garry’s household staff, Kim Krane as his secretary Monica is a deadpan treat, delivering each of her putdowns with acerbic bite and a nice twist of the knife. And always without ever changing her expression.
--Christine Howey, Rave And Pan


[for THE LIFE OF GALILEO, role of Virginia Galilei]
I especially enjoyed Myra Lucretia Taylor and Kim Krane, who played the women in Galileo’s life (his housekeeper and daughter).  While Signora Sarti and Virginia Galilei’s devoutness to the Church may have conflicted with Galileo’s new theories, Taylor and Krane did an excellent job at demonstrating their characters’ unconditional dedication to him (even when his confrontation against the Church greatly impacts their own lives).
--Amanda Hicken, Clue into Cleveland


As we have come to expect over the last few years, production values are high at the Cleveland Play House, and casting is exquisite. After [Paul] Whitworth, look to Kim Krane as daughter Virginia.
--Art Thomas, WestLife


[for CHERRY ORCHARD, role of Anya]
The student actors are superb.  But do not let the term "student actors" deceive you.  These actors are as professional as they come.  Last season’s tour de force production of Cloud 9 was performed by this same group.
--FleetotheCleve.com 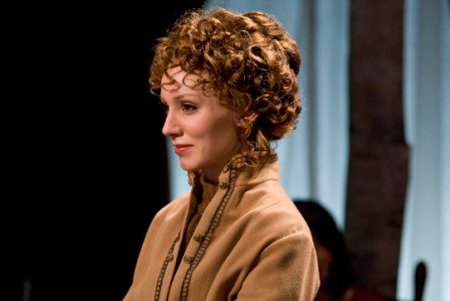 As Anya in CHERRY ORCHARD